What causes a computer to freeze up

Your computer freezes… You were just in the middle of working and now nothing is responding.  Maybe your cursor moves along with your mouse, but nothing is clicking or working.

Perhaps it then comes back to live but only after a long delay.  Does this constantly happen?  Do you get the infamous ‘Blue Screen of Death’ or BSOD as shown here? 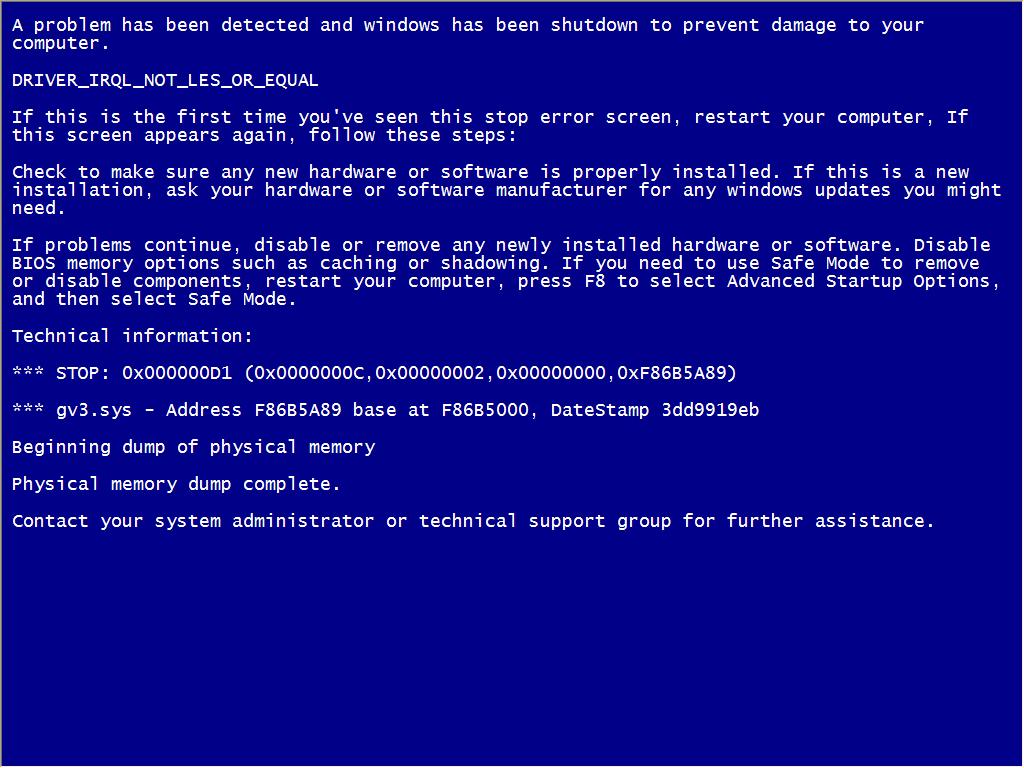 There a variety of reasons for a computer to freeze. Our blog is going to focus on Microsoft Windows common reasons.

A fairly common issue issue is one of the memory chips in your computer (typically soldered to your motherboard) goes defective. This can be very frustrating because it is often sporadic.  Your computer might work for days and then just lock up.  It might also relate to the temperature in the environment or how hard the computer is working.  Also, depending on ‘where’ in the memory it occurs, it might not be noticeable until you start opening multiple programs so that that portion of memory is finally accessed.

Many ‘freezing’ symptoms are simply the computer swapping memory contents to your hard drive to make room for new demands on memory.  Your hard drive is an order of magnitude slower than your RAM.  The easiest way to identify the problem is if your computer is frozen or very slow, look at the hard drive light on the front panel (where its usually located).  On laptops, usually its somewhere around the keyboard.  If the light is blinking very fast, or even worse, solid on, it means the computer is waiting for the pokey hard drive to catch up.

Also make sure you always keep at least 10% of your hard drive free. Windows uses your hard drive as ‘overflow’ for your RAM (memory). If there isn’t enough room on the hard drive to write to, your computer can freeze or become painfully slow

The easiest solution to this problem is add more RAM.  If you are running only a 32bit version of Windows, most PC’s can’t use more than about 3gigs of physical ram no matter how much you put in.  We strongly recommend going with 64 bit windows now as it can address almost unlimited amounts of physical memory.  Any new computer bought should have at least 4 gigs of RAM.

This can be caused by a combination of things.  Simply being in a room that is too hot or poorly ventilated.  It can be caused by running very intensive applications for a long time.  A common scenario is playing a 3-d video game that puts a high demand on the graphics card.  Either the graphics card generates so much heat that it overheats the inside of the computer and affects the main processor, or the graphics card itself freezes (usually resulting in the above Blue Screen).  Often a cause is that an internal cooling fan has died.  Newer computers monitor this status and will alert you when that happens.  Usually when you power it up.  Cooling fans, like most moving machines, have a limited lifespan in the quest for an ever cheaper way to make a computer, lower and lower quality components are used.

Dust can often build up on air flow vents and ducts.  Since there are cooling fans, the computer is constantly moving air in and out of the enclosure and those vents will build up dust such that the flow of air will be restricted.  Always keep them clean, inside and out.

Modern computers are made up of many components.  For example, hard drives, video cards, network cards (even if built into the motherboard) etc.  Each one has to talk to the operating system through what’s called a Driver.  Vendors are constantly updating their drivers to deal with bugs and issues that are discovered over time.  It’s a smart idea to constantly update your drivers to make sure they are current.

Often a perfectly legitimate program can cause a problem.  Usually something that can freeze a computer is something that is ‘low level’, i.e. has access to hardware in your system.  Examples might be a DVD burning application or a Video Game that directly accesses your graphics card.  Try and keep all 3rd party on your computer up to date.  Also avoid multiple programs that perform the same purpose.  Such as two programs for DVD burning or two anti-virus programs.  They will often ‘step on’ each other and cause problems.

Sometimes computer freezing is a sign of your system being infected with the virus. To see if any of the symptoms for poor computer performance fit the bill:

Windows 8 now includes full anti-spyware, anti-virus and firewall software built in.  We also recommend NOD32 from ESET.  We are not big fans of MacAfee or Norton as they tend to be ‘bloated’ and can significantly slow down your machine.

How to Fix a Computer Freezing Problem

You really need to diagnose your computer to find the root of your problem. Doing this manually, especially if you aren’t a computer guru, can be even harder.  One suggestion is to boot your computer into ‘safe mode’ by pressing F8 during boot.  Select Safe-Mode w/networking and run for a while.  The computer will be missing functionality and run a bit slower, but if it doesn’t freeze for a while, it means your problem is likely software/virus and not hardware.

If this is a server, your problems are more serious as multiple people depend on this equipment.  If this server is critical to your business we strongly recommend our Business Disaster Recovery Solution that ensures you can stay up and running from something as simple as a virus, through a natural disaster.  You can even start up a copy of your server in the cloud.

Another great feature of Windows since XP is System Restore.  System restore allows you to ‘rewind’ your computer to an earlier point in time.  Unlike a backup, it just restores your programs and settings but leaves your data alone.  Restore an entire computer from backup will overwrite any changes since that backup.

In many cases you really need a professional to help diagnose and solve these problems.  At Clients First Business Solutions, let us help support you in the New Jersey, New York, Pennsylvania and Connecticut area.  (NJ, NY, PA, CT, NYC).  Click on the chat bubble below or give us a call at 732-970-1450.  We are happy to help you!